In the Open category the Kenyans once again completed a podium sweep with Cosmas Kimutai winning the Men’s race in 2:22:48 while Pamela Rotich was crowned the women’s champion with a time of 2:38:31.

Reigning SEA Games marathon champion Soh Rui Yong was the first local Men to cross the line and was crowned Singapore’s first national champion finishing in 2:35:55. Rachel See won the accolade in the local Women’s race with a timing of 3:11:08 (unofficial).

Ashley Liew, the latest Singapore elite marathoner to join ONEathlete few weeks ago, finished with a timing of 2:50:21. While Evan Chee, wrapped up his 4th and final marathon race for 2017 (following Tokyo, Bangkok, Berlin) finishing in 2:54:38 on a humid but relatively cool and overcast December morning where the skies even looked threatening atone point during the race.

Ashley and Evan on the podium with SCSM 2017 local Men champion, Rui Yong, at the SCSM 2017 Prize Presentation.

“I had to balance high mileage run training with serving patients six days a week as a Doctor of Chiropractic at Family Health Chiropractic Clinic. In addition, it is never easy racing under the heat and humidity in Singapore. Overall, I’m thankful to my coach, Mr Rameshon, Flexifitness teammates, my encouraging girlfriend Sandra, my father who ran the 10km today, my supportive sponsor Asics and my management agency ONEathlete. I couldn’t have asked for more than to be taking part and racing among the very talented field today” – said Ashley Liew after completing his 28th Marathon today.

“Having raced 3 marathons earlier this year with the last being Berlin marathon just 9 weeks ago, my goals this morning had to be conservative and realistic much as I would have wanted to give it my all once the gun went off. Congratulations to Ashley who ran a superb race as well as all the runners who helped made this event a wonderful experience! It has been a fulfilling year of racing and travelling and I am looking forward to catching up with family and friends over this festive season” – Evan Chee

Also taking part in SCSM this morning were members of runONE & ONEathlete family. They enjoyed this year’s revised route, revelling in the running community’s camaraderie and taking turns to cheer fellow runners along the route.

While Mok had to give SCSM 2017 a miss due to his upcoming wedding banquet preparations. However, he turned up on race morning with a bright smile, this time as a supporter to give back the kind words and support he has received from the running community as well as family and friends all these years. Mok’s wife Belinda completed her 10km run while his sister, Mok Ying Rong, came in 2nd in the local Women’s marathon category.

Leading up to SCSM 2017, Mok also continued doing what he believed in, supporting fellow runners through his #RunwithMok 15-week training programme as part of a RunONE x Straits Times column which advocates getting active as a healthy lifestyle and also provides running tips such as injury prevention. Mok also provided hydration tips and strategies through his social media platforms such as Instagram and Facebook, having experienced first-hand the importance of hydration in the days before, and during, important races. 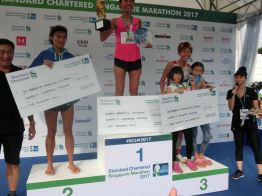 (left to right): Ashley and Evan with the RunONE & ONEathlete Co-founders; Mok with Belinda after her 10km race; Mok Ying Rong receiving her 1st runner-up prize

The 16th edition of Standard Chartered Singapore Marathon, which started in 1982 and has evolved into a marquee event for Singapore running, saw 48,000 enthusiastic participants in what is likely one of the biggest turnout in recent times. This year’s marathon also incorporated new ‘heritage’ routes and entertainment points, allowing runners to enjoy a historic cultural journey through Singapore as they race past Little India, iconic heritage sites such as Chinatown, Malay Heritage area and the city centre before ending at the Padang.

Ashley (left, in light blue) and Evan (right, in maroon) sharing a light-hearted moment with fellow runners before the gun goes off

SAA President Ho Mun Cheong, had earlier alluded to the partnership between SAA and SCSM organiser, Ironman Asia, as raising the level of competitive distance running in Singapore by giving top Singapore runners a chance to compete amongst the elites at the region’s only IAAF Gold Label race. Mr. Ho’s sentiments was echoed by Mok Ying Ren, one of Singapore’s top marathoners and seven-time SCSM Singapore Men’s champion, who was confident the partnership would resonate with competitive runners in Singapore and also offer opportunities for a finer display of local sportsmanship as well as groom future young running talents. The partnership between SAA and Ironman Asia will last 2 years until 2018.

For any queries, kindly email jed@onemanagement.sg