22 July 2018 – Close to 8,000 people joined #ONEathlete and #ONEteamsg and took part in the 10th edition of Singtel-Singapore Cancer Society’s Race Against Cancer 2018, and helped to raise more than $1.1 million for charity. ONE took part in both the competitive 10km and 15km race categories, as well as the 5km fun run.

The event was flagged off promptly by Guest-of-Honour Minister Chan Chun Sing, as runners took to the roads under cooling conditions. While the out-and-back race route was well-marked and easy to navigate, runners had to battle the incessant headwinds after the 5km U-turn. Nonetheless, ONEathlete Evan Chee gave his all to clinch a hard-fought 6th-place finish in the Men’s 15km race, barely 3 weeks after racing the Gold Coast Marathon. 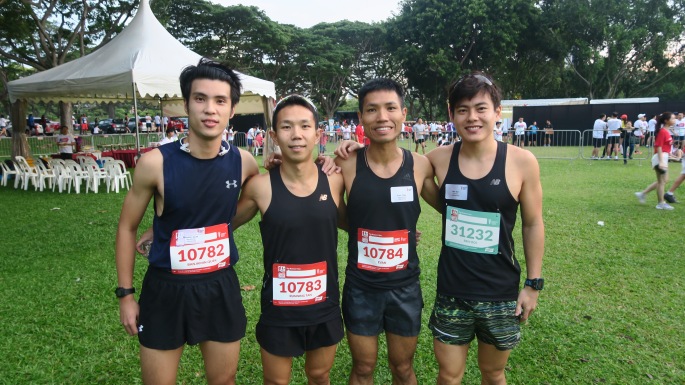 In the 10km category, triathlete Ben Ooi finished strongly to come in 7th in the Men’s race while Belinda Ooi (Mrs Mok) executed her race plan perfectly to clinch a 4th-place finish in the Ladies’ race, much thanks to the encouraging support from the race pacers which included national marathoners, Jasmine Goh and Rachel See.

The event also saw an outpour of support from celebrities, such as Rebecca Lim, Aileen Tan, Cancer-survivor Pan Ling Ling, and her husband (former Mediacorp actor) Huang Shinan, who had turned up to lend their support and do their part for a meaningful cause.

Take part in the auction now!

One thought on “Race Against Cancer 2018”