23 Sep 2018 – ONEathlete Ben Moreau took home the top honors in the Straits Times Run 2018 Men’s 18.45km category, winning in a time of 62 mins 46 secs, which was over 1 minute quicker than last year’s winner, Kenyan runner James Karanga. It was his maiden run in this race! (Top featured image by Straits Times Run Facebook)

Ben, a previous Commonwealth Games representative, has steadily chalked up a series of race wins in the past few months, such as the Performance Series 10km as well as the inaugural ‘King of the Hills’ race, and demonstrated that he still has the legs to not let age (and his rivals) catch up with him.

In the Men’s 10km category, ONEathlete Evan Chee finished as the fastest Singaporean and 4th overall with a time of 37 mins 7 secs. Evan, who is turning 38, is also showing no signs of slowing as he heads into peak race season in Singapore. He placed 3rd (Local Men’s) at Standard Chartered Singapore Marathon 2017 and is looking to better his results this year. He has also recently shared his thoughts on Masters running where he hoped to promote and encourage the idea of running as an inclusive sport for everyone, regardless of age, gender and athleticism. This was also echoed by Guest-of-Honour, Minister for Culture, Community and Youth Grace Fu, who praised the event for being inclusive, and said: “It is great to see people of different backgrounds coming together here today.” 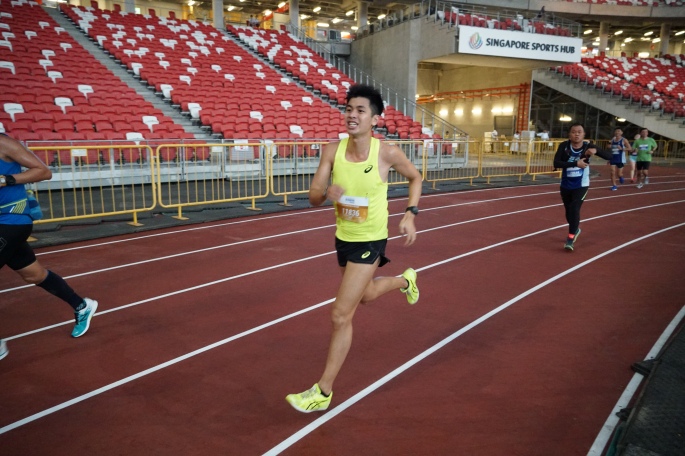 ONEathlete Ashley Liew who also ran his maiden ST Run, finished 7th overall, and 3rd local in the 10km category, was in high spirits post-race. Ashley’s last marathon was at the Gold Coast, and it seems like he will now have some tips for his counterpart who will be participating in the 2019 Edition, as part of his Champion prize! The prize was sponsored by Tourism Queensland for the Straits Times Run 2018!

In returning to the Sports Hub after a 2-year hiatus when the race venue relocated to the  F1 Pit Building and Padang, the 6th edition of the race saw over 13,000 participants, most of whom were eyeing the uniquely memorable opportunity of being able to finish the race inside the 55,000-seat national stadium.

Kelly Latimer and Ross had the uphill task of getting the moods up on the early Sunday morning! Despite the 5am flag-off, the mood at the start was lively and electrifying as participants got ready to enjoy the scenic route. Unlike in 2017 where the race started on the Esplanade Bridge, this year’s route was a nod to its original venue at the Sports Hub.

Read more about what you can do-post ST Run, on this week’s #AskMok HERE