SHAHEED ALAM – A bittersweet farewell to WTA in Singapore. 2014 – 2018. These 5 years will always be remembered by not only tennis enthusiasts but also sports fans in Singapore as the time when the top 8 Women’s Singles and Doubles Teams competed on our ‘little red dot’. As the Singapore Indoor Stadium dismantles the center court for the last time, we should cherish the experience we’ve had over these amazing 5 years.

I had the incredible opportunity to be  the hitting partner for these players in the last 3 years (I was too young and not good enough in the first 2 years haha) Being their hitting partner was definitely an eye-opening experience because I got to see up-close the way they practice, warm up, prepare for matches. I got to see all of it. From the extremely focused Garbine Muguruza to the relaxed Caroline Garcia, I was privileged to witness the different personalities of each player which would otherwise have been very difficult to spot on TV. Over the past 3 years, I have had many awesome experiences but 2, in particular, stood out.

In 2016, Ali and I got called to practice with the dream team of Sania Mirza and Martina Hingis! Before even stepping on the court, it was already pretty cool to even (just) think about practicing with them. The schedule was to practice for an hour on the practice courts at OCBC Arena followed by another hour on Centre Court at Singapore Indoor Stadium.

Understandably nervous, we both started practicing making several mistakes as we were (a little) overwhelmed by the situation. As the session went on, they realized that we were pretty nervous but nonetheless they were still super friendly and made us feel more at home.

After we ended our practice at OCBC Arena, Ali and I were going to walk across to the Indoor Stadium (10minute walk) while Mirza and Hingis were going to take the car that was waiting for them. Ali and I could not enter into the pick-up area as our accreditation did not allow us and only players/coaches could enter. Looking back, I felt that Hingis and Mirza thought we were going to take the car as well so they walked out first while we were still packing our bags.

About 5 minutes later, Martina Hingis came running out and told the volunteers to call us back. When we got to the facilities desk, we remember Hingis waiting for us and saying “Come on guys, the car is waiting for you guys”. Looking super shocked, we laughed and followed her to the pickup point where they were 2 Porsches waiting for us. She then continued saying ‘1 follows me and the other follows Sania’. I followed Hingis and for those precious 10 minutes, we chatted about everything and anything before our second practice session on Centre Court. That was an experience like none other, which only goes to show that they were both incredibly humble and down to Earth while being absolute legends in the sport!

The next memorable event was when I  I practiced with Karolina Pliskova this year. She has to be the most relaxed player on tour. Incredibly effortless in her play, she’s definitely a joy to watch. I had the pleasure of getting to know her team as well, comprising her Coach, Rennae Stubbs, and Fitness Trainer/Agent/Husband, Michal Hrdlicka. We practiced every day from Saturday (before Day 1) up till the following Saturday (where she played her semifinals) and it was an amazing experience. They really made me feel like I was part of their team for that week as they were super friendly and humble. Overwater breaks, they would ask me about my tennis career and gave me plenty of valuable advice and encouragement.

On the day of the finals, when they were at the stadium to collect their belongings before returning home, they asked if I was in the stadium as they would like to say a few words of thanks and goodbyes in person. Fortunately (for me),  I was, and so we met at the player lounge and had a chat before they left. We promised to keep in touch and Pliskova even said that she’ll give me a call when she’s in Asia if she needs a hitting partner(not sure how true that will be though 😂) All in all, it was a superb experience and I couldn’t have wished for a better end  to the last year of the WTA Finals.

At this point, I would also like to thank Sports Singapore, Singapore Tourism Board, WTA and all the sponsors for hosting this prestigious tournament over the past 5 years. As they say, when one door closes, another opens so we should hope and look forward to more world-class tennis tournaments being hosted in Singapore. Perhaps even the ATP Finals. 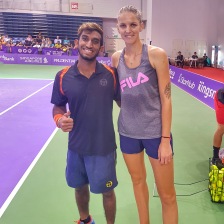