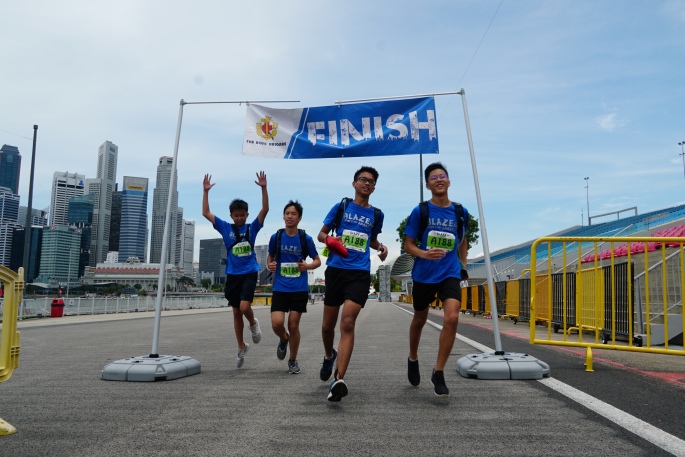 13 Apr 2019 – Participants from ages 13 to 17 started streaming into the start location – the scenic Floating Platform – at 4.30am. They were sleepy, maybe, but undaunted, as they geared up for the annual (and may we add, grueling) BB Blaze 2019, an outdoor adventure and sport based trail race, organised by The Boys’ Brigade in Singapore.

Preparations began as early as November 2018, kicking off with a preparation clinic by ONEathlete and former BB-boy himself, Ashley Liew. More about race prep clinic here!

2) Geared up by Mok ying ren

RunONE was also also on board as the Official Training Partner, allowing these young boys to train effectively in their lead-up to the competition, through a RunONE training programme created by Double SEA Games Gold Medalist, Mok Ying Ren.

It was thus apt for Mok Ying Ren to lead the 500+ boys in a set of dynamic warm-ups, also sharing medical/safety tips to keep in mind! He emphasized hydration tips – “Boys, remember to drink to the point of thirst” – as the organizing committee anticipated a very hot day.

Mok Ying Ren also mingled with the participants and heard them share about their planning phase and race strategies, before heading off for his hospital duties.

The organisers partnered with District Race – an innovative mobile app – to make the race more interactive and fun for the boys! If you had been in the city or Marina Bay area, you would have seen at least one of the 120+ teams in action.

We can learn a lesson about true sportsmanship just by observing as competitors mingled with one another, had fun together, and helped their ‘bros’! This characteristic of the boys from The Boys’ Brigade is quite the norm, but for any outsiders, it was a little more evident today.

What’s a competition without prizes? 5th Singapore Company, Kuo Chuan Presbyterian Secondary School (Team A106) and 14th Singapore Company, Anglican High School (Team A126) won the 3rd and 2nd prize respectively. Team A177 from 60th Singapore Company, Raffles Institution, emerged as the overall champion of BB Blaze 2019! They also received the coveted Winston Choo Challenge Trophy (named after the former BB Boy and former/first Chief of Defence Force (CDF), who flagged off the race in the morning). This was presented by Guest-of-Honour Dr Lily Neo.

The Social Media Challenge was won by the 26th Singapore Company , Tanglin Secondary School, who took part actively with their creative posts to win $500 worth of sports gear, sponsored by RunONE.

While looking back on a challenging but rewarding BB Blaze 2019, we certainly hope that the months of training leading up to the race paid off!

Catch the video below for event highlights by the race organizers!